SCI-Arc instructor Curime Batliner used various data capturing techniques such as such as 3d laser scanning, lidar, infrared scanning, photogrammetry and robotic image capture. In order to extract, process and translate information into a time-based medium. The target of this data capture exercise were human bodies in motion using our MVN Animate system, as well a specific set of locations and objects. Students built an extensive library of 3d point clouds and associated stock footage. This was the building material to construct a spatial narrative. 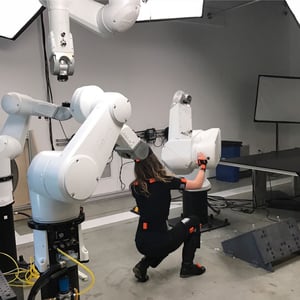 In this workshop students were encouraged to conceptualize the limitations as well as the creative opportunities arising once the world is described and understood trough data representations and aimed to feed machine logics and artificial intelligence, rather than human intellect.

Story
150 years in the future, where (hu)mans are prone to Bionic Eye Disorder - where due to neuron-lens’, one lives in the mind as the body is forgotten. Brianna sits in the autonomous doctors room, where AI robots are automated to reactivate the human body for the mere fact that they still need healthy biological bodies to function and live longer.

You can see the final result here: