It is generally easier to design automated ground vehicles (AGVs) for indoor than for outdoor use. Inside a warehouse, for instance, an AGV moves on a smoothly finished, flat surface, in an area enclosed by walls, and along fixed, dedicated routes which are marked with barriers or guidelines for navigation, and which eliminate the risk of collision with people or other objects.

Few companies have successfully mastered the much more difficult challenge of making a robotic vehicle which can be deployed outside, on mixed terrain. Among the pioneers in this field is Innok Robotics, based in Regenstauf, Germany. And the solution which it uses for tracking the position of its AGVs with centimeter-level precision is a form of dead reckoning using the inputs from a sophisticated MTi-30 AHRS motion tracker from Xsens.

Innok Robotics supplies modular development platforms which researchers and manufacturers can use as the basis of designs for application-specific AGVs. It is also developing a new range of standard AGVs for use in emerging applications, such as robotic ground transportation between warehouses in a campus or business park.

Innok Robotics’ designs have to solve both mechanical and computing problems. The mechanical problems arise from the operating conditions. A development platform for agricultural AGVs, for instance, must be able to climb and descend slopes, move as comfortably on soil or rock as on asphalt, and operate in all weathers and temperatures. 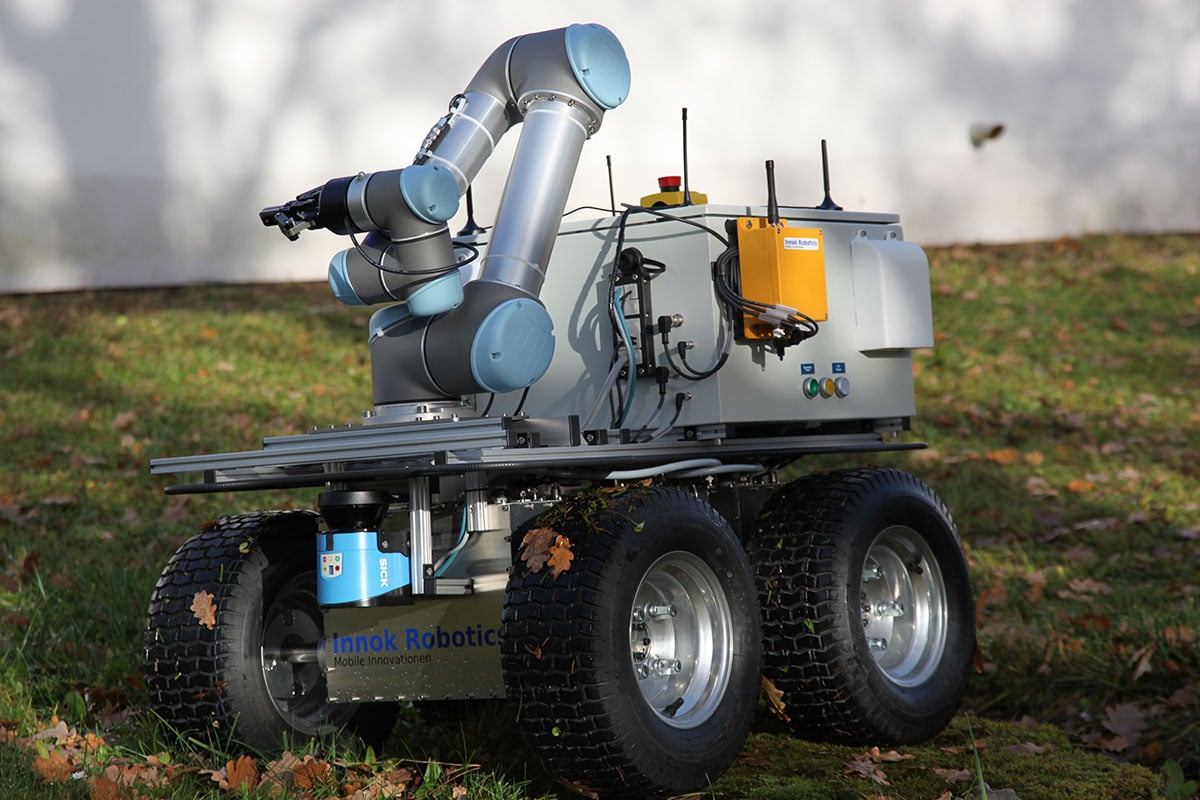 Innok therefore pays close attention to the materials used in the manufacture of its AGVs, the environmental sealing, and the traction system.

The main computing problem which Innok Robotics solves is SLAM – Simultaneous Mapping and Localization. While a warehouse AGV operates in a stable, confined, flat environment, outdoors there are no boundaries, the terrain must be mapped and traversed in 3D, and the scene constantly changes as plants grow or are pruned, cars are parked or driven away, and so on.

Innok Robotics has developed a solution to this problem which can be applied in a wide variety of user-defined spaces. Its solution depends in part on an ability to continuously track in precise detail the movement of the AGV from a known starting point in all three dimensions. For this function, Innok Robotics has selected for its modular development platforms an Xsens MTi-30 AHRS (Attitude and Heading Reference System), a type of motion tracker which measures acceleration in 3D, and heading by reference to magnetic North. The AHRS fuses the raw acceleration data with data from its gyroscopes and magnetometers to produce estimates of roll, pitch and yaw which are updated at a rate of up to 400Hz.

A typical example of the way that Innok Robotics’ SLAM technology is implemented is a specialist AGV, Rainos – a fully automated system for watering the floral displays and flower beds planted at graves in graveyards.

This is a highly specialized application for robotics, but it has a high value for professional gardeners, who are typically employed by families to water the graves of their loved ones. Performed manually, this irrigation task is tedious, laborious and time-consuming, but is not paid well. This makes it an ideal application for robotics. 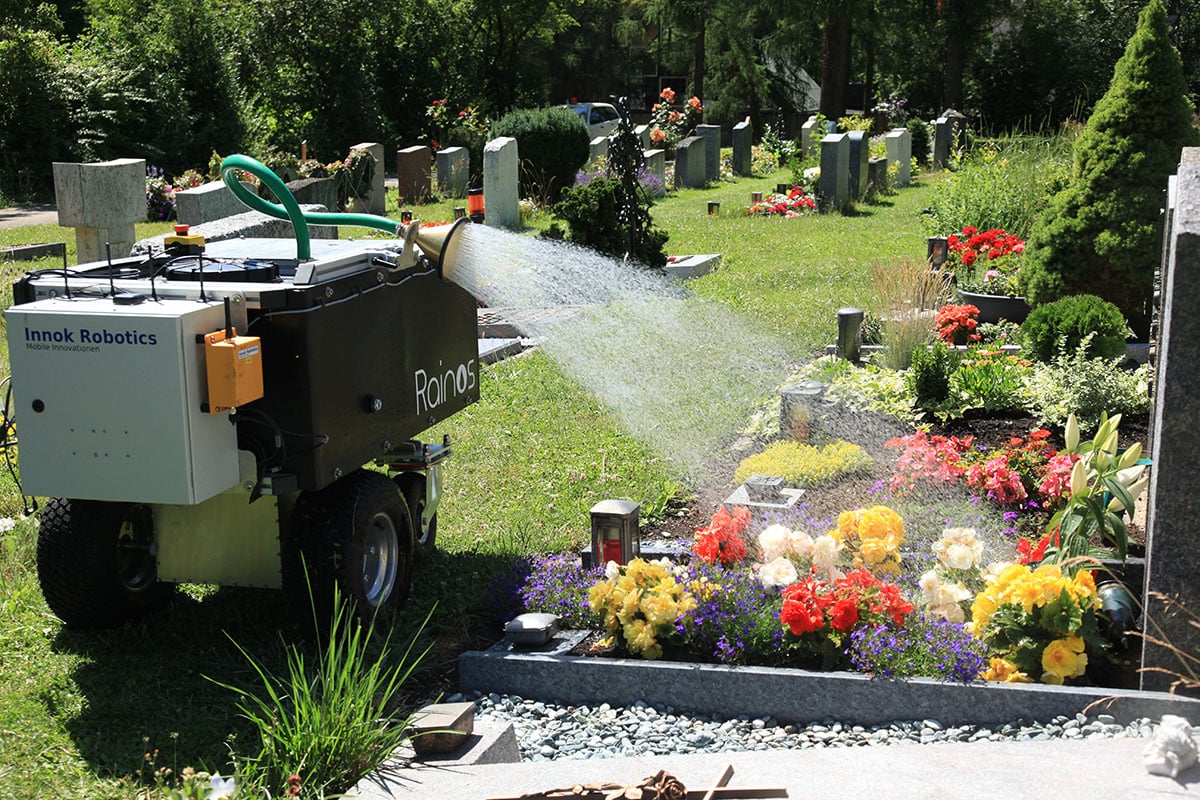 The Rainos AGV – an automatic system for watering graves

Innok’s Rainos AGV performs the task entirely autonomously – but it can only do so because it is a teachable robot: in the initialization phase, the gardener ‘shows’ Rainos how to perform the task. Using a remote control, the gardener guides the AGV along all permitted routes, and tags the locations of graves to be watered, and of water refill points. Crucially, the gardener will also record the AGV’s parking station – the known start point from which each irrigation session begins.

During initialization, the Rainos AGV will create its own map of the graveyard, using inputs from three sources:

After initialization is finished, the Rainos AGV has a complete 3D map of the graveyard, the routes by which it is able to travel round the graveyard, and the locations in which it must perform watering operations.

This is how Innok Robotics’ products solve the SLAM problem in real time: an Innok Robotics AGV can determine its position by a process of dead reckoning from a known starting position, using accurate, low-drift motion and heading data from an MTi-30 AHRS. And a combination of the stored map and real-time ranging inputs from a LiDAR sensor make it aware of its environment, even as the surroundings change due to factors such as the growth or pruning of vegetation, or the appearance or removal of obstacles. A powerful on-board computer enables the AGV to re-calculate its route continually to avoid obstacles while still completing its mission. 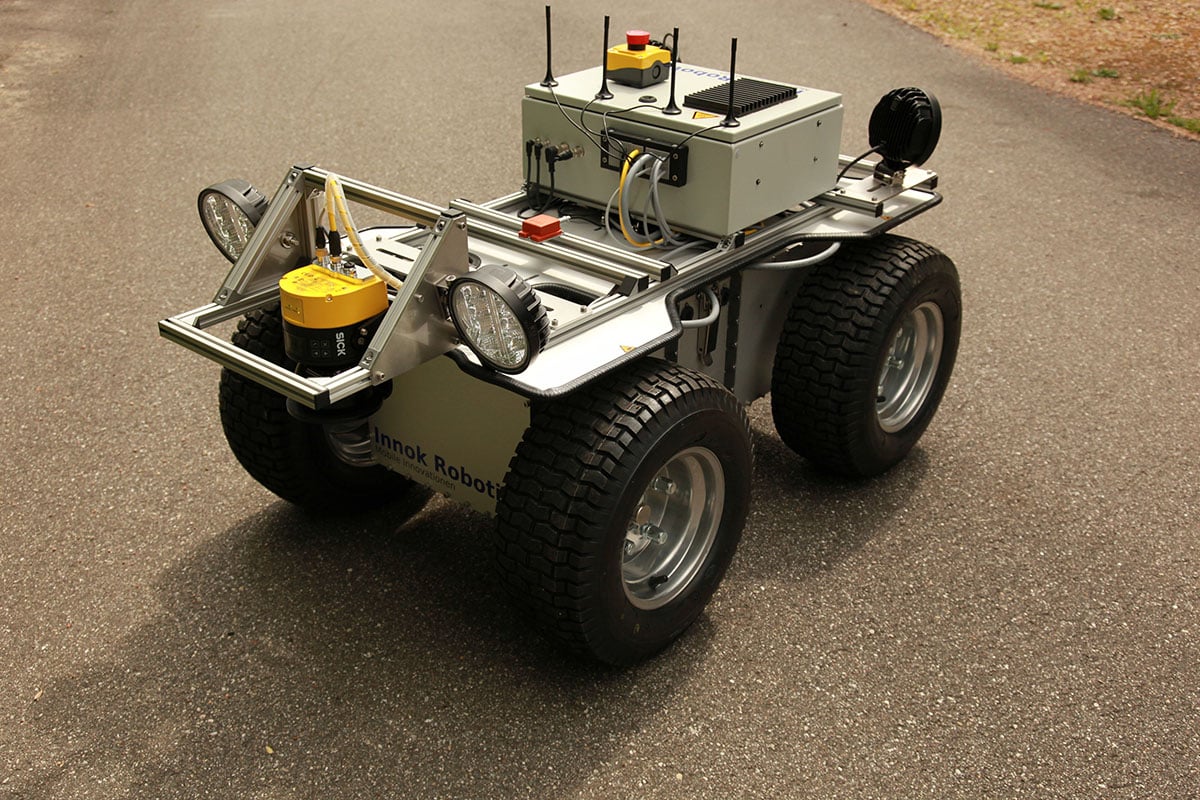 Innok Robotics’ Direct of Sales Alexander Hoegerl says that the company’s technological achievement depends on sensor fusion – combining multiple data inputs to create a more detailed and accurate picture of the environment around the AGV than any one sensor could provide on its own.

He says: ‘The data from the motion tracker is a crucial element of our AGVs’ position calculations, so the accuracy and low drift of the MTi-30 are really important attributes. It’s a robust device as well – its IP65 rating means that it is suitable for use outdoors, and that gives us the freedom to locate the sensor wherever the design requires.

‘What makes the MTi-30 particularly attractive for us is that it is also easy to implement in new designs. In our business, which involves constantly creating new prototypes and systems for specific applications, we have to manage development time carefully, and so it’s really helpful to us that the Xsens AHRS is easy to integrate into our system designs.’

To find out more about Innok Robotics’ outdoor AGVs, go to www.innok-robotics.de/en.

The MTi-30 is discontinued now. As a replacement we offer two AHRS options: MTi-630 and the MTi-630R (rugged).  Find out more about these products: