The English Institute of Sport’s core goal is to improve performance through science, medicine and technology – and Xsens plays an important part in that mix.

Primarily, the EIS focuses on supporting Olympic athletes in their pursuit for medal success, with a team of performance innovation specialists that consult across the 38 Olympic sports that range from British track cycling to disability table tennis and beyond. Their research and applied approach covers a variety of processes, each tailored towards the development of an athlete’s specific skill or technique.

Technical Lead Liam Sanders focuses especially on biomechanics research and consultancy. Over the years, motion capture has played an increasingly important role in his monitoring, measuring, and analysing of an athlete’s motions. And with Xsens MVN and MVN Analyze in his toolkit, he’s finding new ways to benefit from the technology.

“The mutuality of athlete and environments”

Motion analysis systems have played an important part in the support carried out by the EIS, but, historically speaking these systems have often been, expensive, requiring extensive time for calibration. This has restricted us to capturing motion in a laboratory environment – hardly an athlete’s natural playing field.

“Our standard systems have been excellent in that they enable us to monitor and assess human movement at a miniscule level of detail, but they also require us to remove the participant from their training or competing environment,” explains Sanders.

“We could run tests on a sprint athlete in a laboratory. However, the surface of the laboratory, the athlete’s footwear, and the temperature of the room all impact on performance. Therefore, their skill outcome and the data we collect may differ than if recorded out on the field.”

“This highlighted the need for biomechanist’s to accurately collate athlete information in the performance environment and to create data capture opportunities that allow athletes to become attuned to the specifying information sources available in that environment.”

Xsens inertial motion capture solutions have liberated EIS from the laboratory, with technology that can not only be used anywhere, but are easily transportable. Motion capture can now come to athletes, rather than them going to it. Essentially, Xsens is EIS’ portable motion capture system/laboratory.

“Instead of calibrating a space with, often with a fixed force platform and multiple cameras in fixed locations, Xsens presents the ability to calibrate the athlete themselves,” says Sanders. “The athlete can then perform under normal constraints in their training environment : skate on ice, row on a lake, cycle in a velodrome - we get real, in-the-field data. It’s a huge step forward – everything’s wireless, everything is recorded remotely, and the data is authentic - The important point here is that individuals cannot be truly understood without reference to their specific environments.” 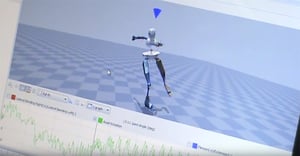 “Consequently, when collating athlete data, performance environments need to be carefully replicated during practice and training so that athletes can detect affordances for action and use these sources of information to regulate their movements. A key question for any EIS biomechanist is to ask herself/himself: are my data capture sessions representative of the athlete’s performance environment? – Xsens has bridged the gap to this quandary”

For Sanders, this new approach has been groundbreaking, radically improving the process of performance analysis.

Generally speaking, performance analysis is a three stage process, comprising capture, analysis and feedback. Recently, however, another stage has been introduced – a concept called “relearning”, which relates to coaches and consultants using this data to impart new approaches to a technique. Xsens has been vital in helping to gather data to help better communicate findings during the relearning process.

“Xsens gives us the ability to analyse data and instantly put it into a digestible format, which is much more productive than just writing reports all the time” explains Sanders.

“Given that the capture process is now so quick and far easier with Xsens, we have the ability to spend time actually working with coaches in the communication of this data – essentially landing the message where it is most required. That means a better, more efficient support mechanism!”

In advance of major sporting competitions, EIS biomechanists work closely with the performance director, coaches and support staff to help develop a strategy to win in the environment that the sporting event will be hosted.

“What it takes to win in Reading – the technical, physiological and environmental components – is very different to performance at that same time in Rio de Janeiro, due to temperature, water pressure and psychological constraints,” says Sanders.

In preparation for the Olympic Games Rio 2016, Sanders travelled to Rio to collect biomechanical data several months prior to the competitions – the aim being to understand how an athlete moved in that specific environment. And he recently did the same for the 2018 Winter Olympics, to be held in Pyeongchang in South Korea.

Using Xsens solutions, Sanders considered how data from the gym compared to what athletes perform out on the ice: “In PyeongChang, we had the ability to collect technical time series data, performance data and high speed data on the ice using Xsens – which has never been done before!” says Sanders.

“We use the same system in canoeing and rowing as well, actually on the water. We are able to see that athletes perform quite differently out there than they do on a rowing machine in the gym. Those are really the realms that we’re working in now. The flexibility of Xsens has changed the game in that regard.”

The next generation of sports analysis

Things are about to get even better, too. Xsens MVN Analyze 2018 overcomes the effects of magnetic interference on motion capture data. In this new update, even more flexibility and opportunity opens up regarding environments where Xsens can be utilized.

“This new update adds total confidence to the data that we’re being given. That’s just the world we live in: there’s electricity and technology all around us. With the new system, however, those issues aren’t a consideration.

“Xsens has increased the reliability and accuracy of its results tenfold. It’s really exciting – the data we can collect and the advice we can give off the back of it will take EIS to entirely new places.”