Cerebral palsy (CP) is the most common cause of physical disability in childhood, affecting 1.5-3.0 per 1000 living births in Europe. Spasticity is a clinical phenomenon that is frequently present in CP. It is characterized by a velocity-dependent increase in stretch reflexes. This hyper excitability of stretch reflexes in muscles limits children in their mobility and gait.
Several physical examination tests have been developed to assess spasticity. These tests are used to assist clinical decision-making and the evaluation treatment, such as botulinum toxin type A injections, selective dorsal rhizotomy and orthopaedic surgery. However, performance and interpretation of these tests are often subjective and inaccurate, and standardisation is often lacking. Furthermore, the definition of spasticity, in relation to its aetiology and its clinical expression at joint level, has been subject to debate for a long time.

Instrumentation of a spasticity test could be very helpful for standardization of test performance, objective results and insight in the underlying mechanisms of spasticity. We therefore applied IMMS (sensors of the inertial and magnetic measurement system of Xsens, Xbus Kit) and EMG (electromyography) to measure joint angle, joint angular velocity and acceleration, and muscle activity during performance of the SPAT (Spasticity Test, based on the Tardieu Scale) in 20 children with CP.

The SPAT included a slow and a fast passive stretch of three different lower leg muscles: the medial hamstrings (knee extension movement), the soleus and the gastrocnemius (ankle dorsal flexion movement). The slow stretch was performed to measure the total range of motion of the joint (ROM). The fast stretch was performed to measure spasticity. Spasticity is indicated by a catch, which is an abrupt stop or increased resistance in the motion caused by a sudden increase in muscle activity, before the end ROM is reached.
Two IMMS sensors were placed on the proximal and distal body segment suing neoprene straps. EMG sensors were placed on the muscles. The joint angles that were measured with the IMMS sensors were compared to goniometric measurements. A goniometer is usually applied in clinical practice to measure the angle of the catch after the performance of the stretch movement. Furthermore, we compared the muscle activity from the slow movements with the muscle activity from the fast movements with and without catch.

Application of IMMS improves the objectivity, accuracy and standardization of joint angle measurement during spasticity tests. The catch can easily be defined in the joint angle signal. In contrast, a goniometer can only be used in a static situation after the muscle stretch, causing inaccurate measurement of the catch.
The EMG measurements showed that muscle activity is highly increased in fast passive stretches were a catch is encountered. This indicates that muscle activity is primarily responsible for the catch.
In clinical practice, the combination of IMMS with EMG adds to the reliability and meaningfulness of clinical spasticity tests, and provides insight into the expression of spasticity at joint level. 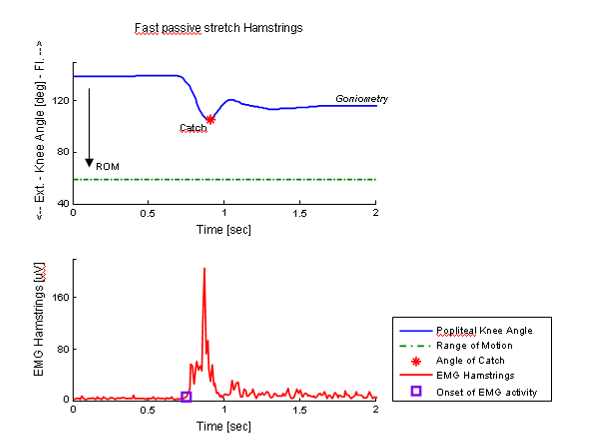