APM Terminals Rotterdam has been operational since October 2000 and with an annual capacity of 3.25 million TEUs, it is one of the largest container terminals in Europe. Located in the Port of Rotterdam, it is a major transhipment centre for the British, Irish, Scandinavian and Baltic Markets, with multi-modal access to the 320 million-strong consumer, commercial and industrial centres of Continental Europe.

Using human-operated Straddle Carriers, containers are being moved from the quay to a temporary site within the stack.

straddle truck drivers are located in a metal cabin elevated 12 meters above ground level. While driving sideways and looking down when handling containers extreme neck movements occur. For obvious safety reasons, drivers make use of safety belts while operating the straddle carrier. The cabins are fitted with a safety belt that can both be used as a two-point or a four-point seatbelt system for extra safety. Concerned not only with safety but also with worker health APM Terminals Rotterdam wanted to know if potential upper body movement restriction due to the use of the four-point safety belt could lead to an increased physical strain on the cervical spine. 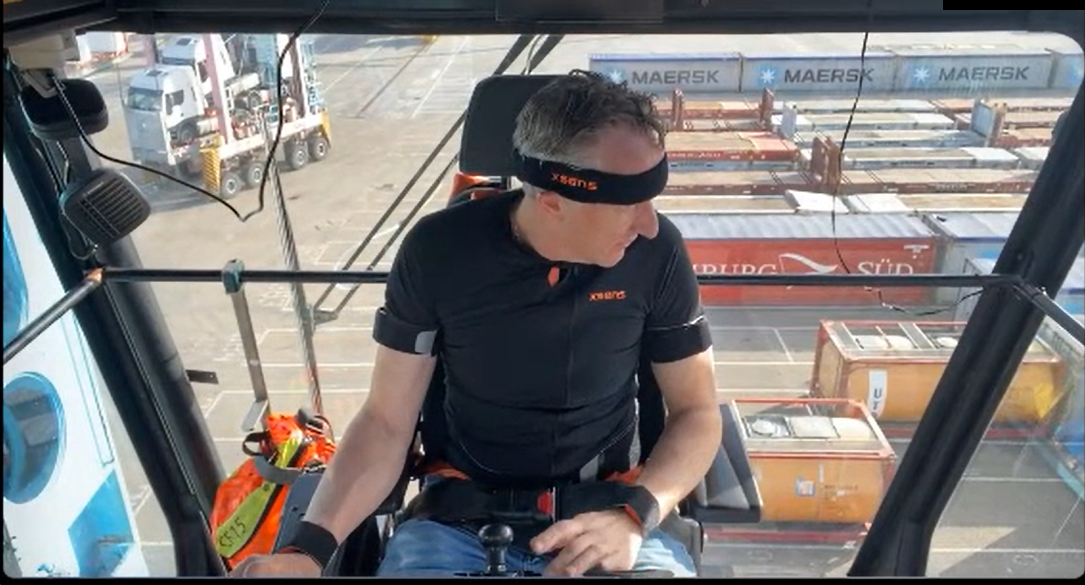 Occupational health physiotherapist Erik Saathof supports organisations in improving working environments and reducing risk factors for the onset of Musculo Skeletal Disorders (MSD’s). He was asked to investigate the effects of both types of seatbelts on the human body.

Due to the specific work environment of the cabin, the options to conduct a thorough assessment were limited. Traditional methods like posture score sheets and other assessment tools available were deemed not accurate enough nor practical or reproducible enough to serve the needs of the AMPTR project. The use of video analyses alone lacked inter-observer reliability as well as intra-observer-reliability.

“Motion capture systems using motion sensors needed to be wireless and able to withstand the possible signal distortion effects due to the metal cabin and general presence of metals in the carrier itself and the containers being moved.”

Using the Xsens full-body motion capture system, MVN Analyze, a successful pilot was conducted to test the equipment in the actual work environment. No distortions or interruption is in signal transmission occurred. The system proved to have full magnetic immunity. The MVN Analyze Pro software generated an avatar that shows exactly what the driver is doing and the camera footage was synchronized with the avatar. The data acquired by the different sensors allowed an accurate comparison of the cervical range of motion during the different tasks. The additional camera footage added more detailed information about the drivers and their personal preferred techniques.

Not only the load on the cervical spine was evaluated, but also differences in movements in the lower back were measured and compared. The importance of evaluating both is because the anticipated increased freedom of movement with the two-point seatbelt could not only result in the positive outcome of decreased neck movements. It could potentially result in more and more extreme lower back movements leading to an increase in the risk of lower back problems. Both aspects are important for worker health and had to be taking into account analysing and weighing the results and proposing possible solutions.

The automatically generated RULA report, which is an ergonomic risk assessment tool used to evaluate risk factors associated with upper limb MSD’s provided a first glance at the results.

For a more detailed analysis about exact degrees of movement and the duration of those movements and posture more information was needed. Xsens was able to supply the raw data consisting of 100 measurements per second per sensor. With the continuous support of the Xsens product specialist analyses of every joint angle and body segment was possible.

This allowed for customized analyses using international ergonomic standards for the assessment of static work postures and movements. For assessing risk factors associated with neck and lower back MSD’s the NEN-ISO 11226 and the NEN-EN 1005-4 were used.

The amount of time spent in the different risk zones as stated in the standards was analysed as well as the time spent per 5-degree angle of for instance neck rotation and lateral bending. This made it possible to look at the overall difference among the drivers using the different belt types but also the exact differences between belt types in each individual driver.

The results gave clear insights into some of the present biomechanical risk factors associated with Musculo Skeletal neck disorders. As for the differences between the two belt types generally only very small differences were found.

When compared to the two-point seatbelt, the four-point seatbelt showed an increase in neck movement in all directions (flexion/extension, lateral bending and rotation) in all six participants. The average increase however was between 1,3 and 3,3 degrees. Which would in practice not lead to an increased risk of developing MSD’s.

As for the biomechanical risk factors associated with low back pain, the differences were again small. When compared to the two-point seatbelt, the four-point seatbelt gave a mixed picture. All participants had less bending but also increased lateral bending and rotation of the trunk. The average increase was between 0,5 and 4,5 degrees. Which again would in practice not lead to an increased risk of developing MSD’s.

Valuable information was obtained by evaluating the difference between the different drivers. When looking at for instance neck rotation, the data showed some drivers spending a significant amount of time in more than 45 degrees rotation, where others would not and stay within the 45-degree angle. Also, the differences in time spent looking to the left of to the right was insightful.

The results allowed for an in-depth view of the biomechanical aspects within the human body. It provided valuable information about the influence of both cabin and driver seat design, the design and functionality of safety belt and human behaviour on physical performance. Most importantly it provided APM Terminals Rotterdam with a clear answer to their question about the differences in neck strain between two types of safety belts.