Delft Aerospace Rocket Engineering (DARE) is one of the most advanced amateur rocketry clubs in the world. We are a group of ambitious students sharing an intense passion for rocket science and our dream is to reach space at 100 km altitude. Within DARE we design, build and launch rockets that serve a scientific and educational purpose. Our members challenge each other by self-initiated projects. In DARE people get the opportunity to obtain hands-on experience unique on this planet.

DARE is divided up into various subteams, such as various engine development teams, Capsule & Recovery Team, Electronics Team, and the Advanced Control Team. The main project in which these subteams work together, is called project Stratos. In 2009 DARE has launched the Stratos I reaching an altitude of 12.3 km. With this we set the European altitude record for student/amateur built rockets. On 17 October 2015 DARE launched the Stratos II+ which reached an record-breaking altitude of 21.5 km, and so we maintained the European altitude record by breaking our previous one.

Within DARE, the Advanced Control Team (ACT) is the first subteam which works on active stabilization methods for sounding rockets. The objective of the ACT is to perform baseline research in active rocket stabilization, which can be used in the future for the next Stratos. Active control is essential when aiming for high altitudes, since this would continuously control the flight path and so minimizing the external disturbances due to the wind. Furthermore, by flying perfectly vertical the rocket shall reach higher altitudes then when it flies a ballistic trajectory, which secondly results in a minimum ground track. The latter one is important for defining the safety zone, which is easier to define if the zone is small. And so by implementing active control, the rocket could eventually fly in a safe and stabilized manner into space. 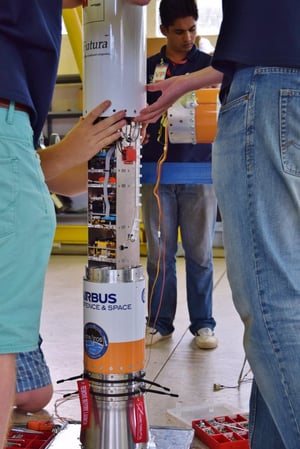 The most important task of the ACT is to develop a fast and stable flight computer, which is able to measure the attitude of the rocket at all times, and to operate flight control algorithms which use the sensor data to control its attitude. Over the past years the ACT is constantly updating its flight computer design, including the sensors connected to that. The main sensor is an Inertial Measurement Unit (IMU), which uses gyroscopes, accelerometers, and magnetometers to determine the position of the rocket. Because of the extreme flight conditions in terms of g-forces and vibrations, the ACT needs high quality sensors to measure the heading of the rocket which results in making steering corrections. The team has tested multiple sensors for flight logging and came to the conclusion that only a high quality IMU satisfies the strict requirements of the flight computer. This is why we got in contact with Xsens, since we believe that their MTi-100 is perfect for the purposes of the Advanced Control Team.

GPS is difficult to implement in the rockets because of the high acceleration and altitudes. Also the gravity vector cannot be used in flight and the IMU is placed in a magnetically disturbed environment. Therefore the flight control algorithms rely completely on the accelerometer and gyroscope, which emphasizes the importance of the IMU. Gyro bias stability is the most important factor in this system, since reliable orientation data is needed for the flight controller to point the rocket in a favorable flight direction. The MTi-100 IMU has a gyro bias stability of only 10 degrees per hour so with this sensor we should be able to have an almost perfect vertical trajectory.

On 17 October 2015 the ACT launched the Xsens payload module with Stratos II+ to acquire flight data out of the MTi-100. In 2016 the Xsens MTi-100 shall be replacing the current IMU which is installed in DAREs first actively stabilized rocket, a modified CanSat launcher V7S developed by the ACT. This is basically a standard CanSat launcher with four actively controlled canards on top of the rocket.

The idea is that the Xsens MTi-100 shall be used in future DARE flight computers, which have active control capabilities. The ACT and DARE believe that the Xsens MTi-100 IMU will be key to the success of future launches of DAREs next-generation actively stabilized rockets, which eventually shall bring DARE in a safe and controlled manner into space.