A portable system for collecting anatomical joint angles during stair climbing: a comparison with an optical tracking device

In terms of self-rated health, the most important activities of daily living are those involving mobility. Self-reported difficulty in stair climbing has shown to be useful in assessing and defining functional status of older adults. In general, kinematics and biomechanical aspects of stair climbing are studied using laboratory staircases combined with an optical motion analysis system [1, 2]. Although this kind of research yields valuable information, the results only remain valid in conditions where no anticipation or reaction to a real-world environment is required. The purpose of this study is to compare the anatomical joint angles determined by inertial measurement units (IMUs) during stair climbing, to those joint angles acquired with an optical tracking device.

Fourteen healthy subjects with a mean age of 27 years (range 20 to 37) participated in this study after consent was given. Each subject was asked to ascend and descend a staircase consisting of four steps during twelve separate trials. Six IMUs (MTx, Xsens Technologies B. V., Enschede, Netherlands) were placed on the legs using double-sided adhesive tape with additional elastic straps to hold them in place (Figure 1). Active Codamotion (Codamotion, Charnwood Dynamics, Leicestershire, UK) markers were placed on boney landmarks and on the side of stairs. Data for both the Codamotion and the IMUs was acquired at 100 Hz and an electronic pulse was used to synchronize the two measurement devices. All further data analysis was done using Matlab (MathWorks, Inc., Natick, MA, USA). 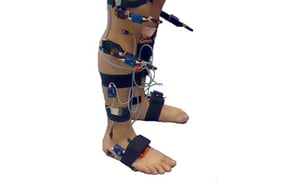 The lower extremity could be approximated as a multi-link chain, with each body part as a rigid segment represented by one IMU [3]. Only movements around the transverse axis (resulting in flexion-extension kinematics) were studied. All anatomical joint angles on the right leg, obtained with the two measurement devices, were evaluated by calculating a two-tailed Pearson product-moment correlation coefficient (r) and by calculating the root mean square error (RMSE) between the two signals.

The right leg seemed to be the preferred side for movement initiation, as participants started in 60% of all ascending trials and 76% of all descending trials with their right leg (Figure 2 and 3). Strong correlations ranging from 0.93 to 0.99 and mean RMSE of 4 to 5 degrees were found for all angles during both stair ascent and descent. 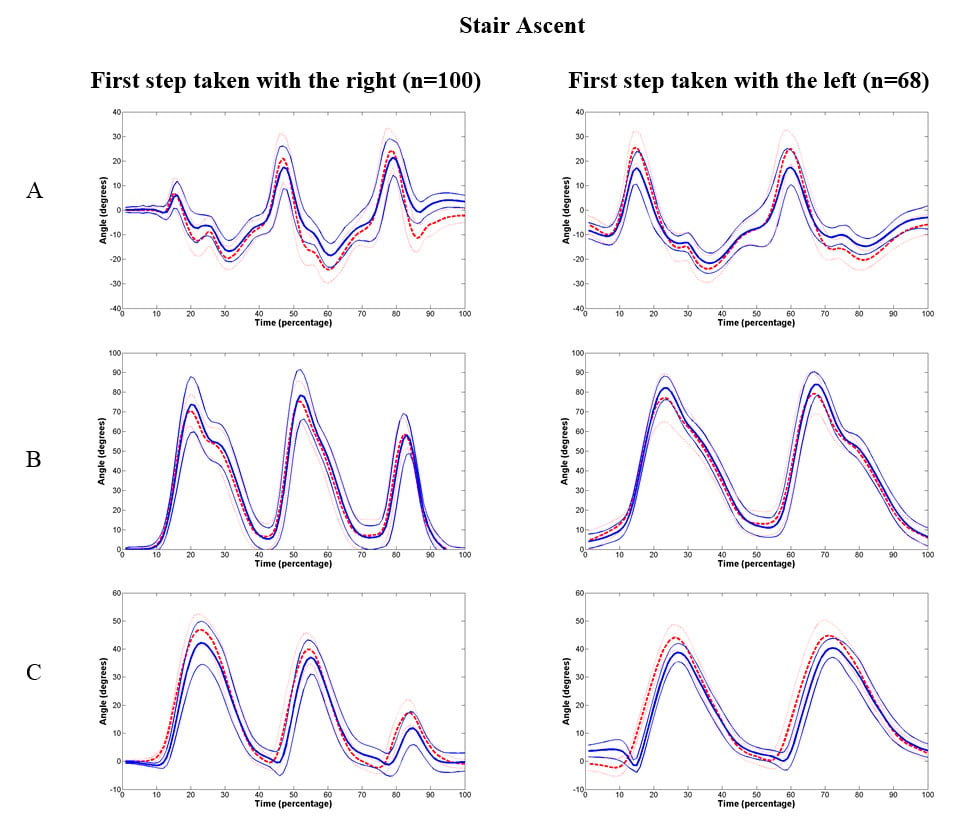 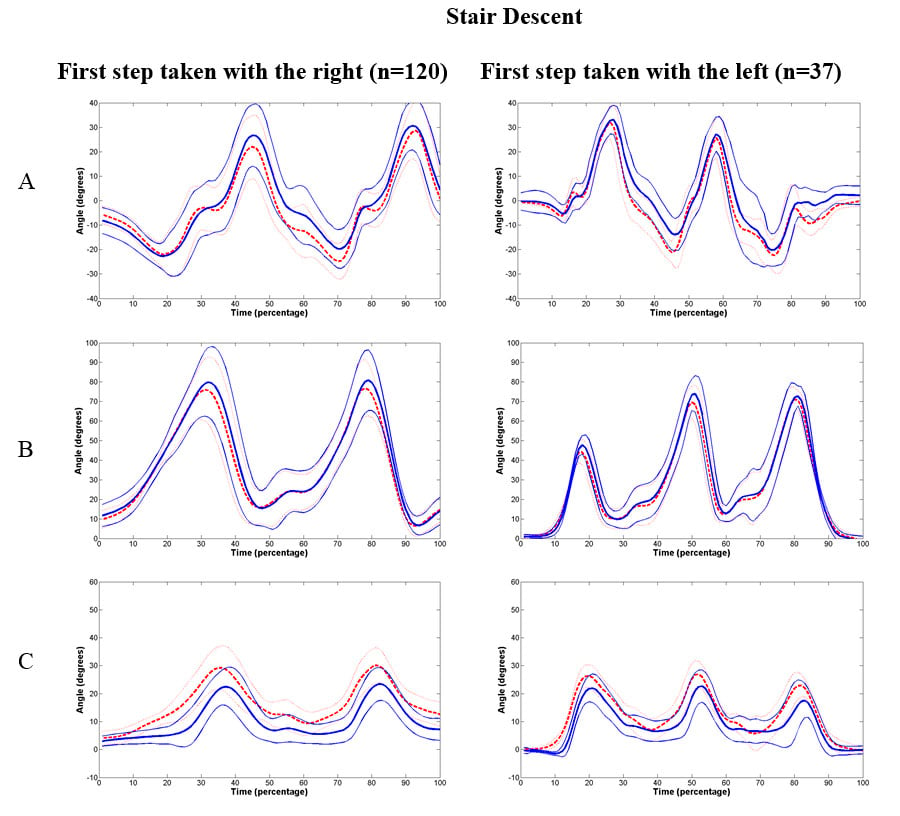 The aim of the study was to investigate if the anatomical joint angles determined by IMUs sufficiently approximate the anatomical joint angles that were gathered with an optical tracking device. Both systems suffer from motion artefacts. A translational displacement between bony landmark and marker is likely to occur during stair climbing, causing errors in estimating position during movement, which in turn leads to inaccuracies in determining angles. The IMUs measure orientation rather than position and are consequently less prone to errors caused by translational displacement of the sensors. Errors related to movement can however still occur in the IMUs, because of rotational displacement of the sensor relative to the body segment.

In general, IMUs provide a good alternative for measuring joint angles of the lower extremity during stair ascent when compared to positional markers. In addition, they provide the opportunity to perform accurate measurements in complex real-life environments using a non constraining measurement device. Part of this study has been published.