Engineers at the Applied Physics Laboratory at Johns Hopkins University (Maryland, USA), funded by the United States Department of Defense, have developed a novel robotics application driven in part by the Xsens MTw Development Kit.

Their objective was to design a robot capable of execution dangerous missions typically performed by soldiers, such as diffusing bombs or manning checkpoints. In order to minimize fatalities and injuries in these and other tasks, a team of engineers lead by designer, Michael McLoughlin, proposed that surrogates could be used to replace the humans who typically do these jobs. The suggested replacement? A Bimanual Dexterous Robotic Platform, better known as “Robo Sally”. 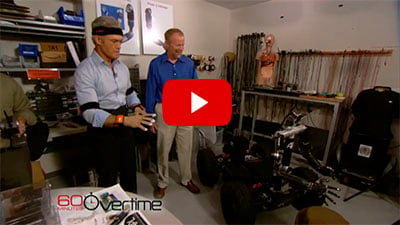 Sally is a robot designed with arms the size of human arms, and fingers so agile they can be used to perform any task a human would do. In development since 2008, the current robot is configured on a base of 4 rugged wheels allowing it to move across even the most challenging terrain. The difficulty however is controlling Robo Sally remotely to keep the operator safe. The engineering team at Johns Hopkins have included two mounted video cameras as Robo Sally’s eyes in order to allow the operator to see exactly what the robot is seeing. The video feed is provided in real time to an operator, who can be located remotely anywhere in the world. All of this control however is designed to permit the effective use of Sally’s most important tool, the prosthetic arms.

The two arms Robo Sally are revolutionary in that they provide the ability of lifelike real time control. Both arms can be rotated about the shoulders, elbows, and wrists, and end in two fully dexterous hands. To control the robot’s movements, the operator would wear a special Robo Sally suit, outfitted with Xsens MTw trackers on the head, upper arms, and lower arms, as well as special sensor-laden gloves. The MTw trackers allow the operator’s moves to be precisely measured and wirelessly transmitted to the robot to allow Sally to exactly mimic what’s happening on the operator’s end.

The development of this Bimanual Dexterous Robotic Platform now allows an operator, located anywhere in the world, to step into a foreign or dangerous environment and perform any number of tasks. As the Applied Physics Laboratory at Johns Hopkins University and DARPA’s robotics initiative continue to push the limits of robotic development we can expect Robo Sally to be leading the way.

Please click the button below for more information on MVN Animate.