The Timed Up and Go test (TUG) measures the time it takes an individual to stand up from a standard arm chair, walk a distance of 3 meters, turn, walk back to the chair and sit down again. This test has been widely employed in the examination of older people [3]. It has also been recommended as a screening tool to determine whether an in-depth mobility assessment and early intervention is necessary for individuals above 65 years [4], as well as in following clinical changes over time in persons with specific mobility problems such as lower extremity amputation [5] and lower back pain [6].

However, despite the fact that the test is seen as an effective method of assessing basic mobility performance, the clinical value of the association between TUG outcomes and falls remains under debate. We previously reported how different verbal instructions and marker layouts directly affect total TUG times [7]. Those results showed that comparisons between TUG times in different studies are unreliable if procedural differences are not taken into account. Therefore, clinicians need to be aware that the instructions given and the tools used, both marker and chair type [8, 9], can alter the outcome of the test. However, the total time might still mask clinical relevant information, as the TUG is timed over a series of tasks (components) which are all important for functional mobility. However, thus far no information has been published regarding component times of healthy individuals using a (task orientated) quantitative component analysis. The aim of this study will be to provide a normative data set of components times for healthy young and older adults, taken into the account the effect of instruction and lay-out [7].

Fourteen young healthy adults with a mean age of 21 years (range 19 to 25) and fourteen old with a mean age of 67 years (range 60 to 76) voluntarily participated in this study. TUG measurements were obtained using an ordinary armchair, with a seating height of 47 cm [8]. Participants were instructed to stand up, walk three meters to a rectangular marker (8 by 2.5 cm) on the floor, turn around, walk back to the chair and sit down. A rectangular marker was used as a turning point, as it has been reported that many people found it confusing to where they were supposed to turn, when a line was used [10]. In order to become familiar with the TUG, all participants performed the test once before being timed.

The following instructions were used and have been previously reported [7]:

A) “Please get up on the word go, stand upright, walk to the marker on the floor, turn around, return to the chair and sit down.”

B1) “Please get up on the word go, stand upright and walk as quickly and as safely as possible to the marker on the floor, turn around, return to the chair and sit down.”

C) “Please get up on the word go, stand upright and walk the fastest you possible can to the marker on the floor, turn around, return to the chair and sit down.”

All three instructions were given with a rectangle marker as turning point. An additional condition (B2) was added, in which instruction B1 was also given using a cone (40 by 40 cm and a height of 52 cm) to mark the turning point. This would provide an insight into how a different lay-out affects speed of performance. Since participants were only asked to speed up and never to slow down the order of instruction was always from A to C. The conditions B1 and B2 were randomly assigned to each subject.

Subjects were asked to perform the TUG test five times for each of the four conditions, while wearing seven inertia measurement units (Xbus Kit, Xsens Technologies B. V., Enschede, Netherlands), which measured the 3D orientation (Euler angles) of the lower extremities and the back (Figure 1).

The segment lengths were taken from anthropometric data [11] in order to keep the model simple. This kind of method and system has been used in a prior study [12]. A quantitative component analysis was used to split the TUG into 5 components and visual output was provided (see movie).

Normative data values for both the young and the old group are given in table 1. Both total and component times are given for each age group. Components as percentage of total time are shown in Figure 2. 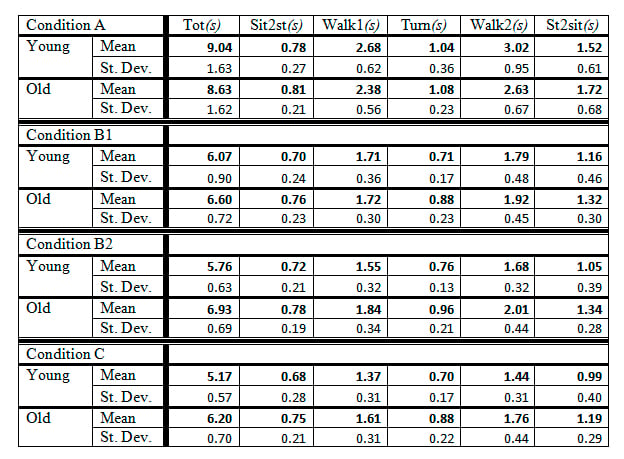 All component times in the non-specified walking speed condition (A) were comparable (p > 0.1) between the young and older adults (Table 1). Furthermore, the standing up component did not seem to differ, in any of the conditions, between the two age groups (p > 0.8). However, turning times were found to be the best discriminators (p<0.05) between groups, if instructions on walking pace were given (condition B1, B2, and C). Only when subjects were asked to perform the test as quickly and as safely as possible, while using a cone around which they needed to turn (condition B2), times of all four components apart from standing up were significantly (p < 0.05) different between the age groups. Turning time during the paced conditions, that used a line as marker, were significant faster (p<0.05) for the older adults then the turning time in the self selected speed condition and when a cone was used as marker. Going quick and safe and using a cone as marker gave a higher average walking time for the participants aged above 65 compared to the condition in which they were instructed to go as fast as possible, showing a direct effect of lay-out on speed of performance

Over all the conditions, the second walking component took up the most time for both age groups, while the standing up component was performed the fastest out of all the components (Figure 2). 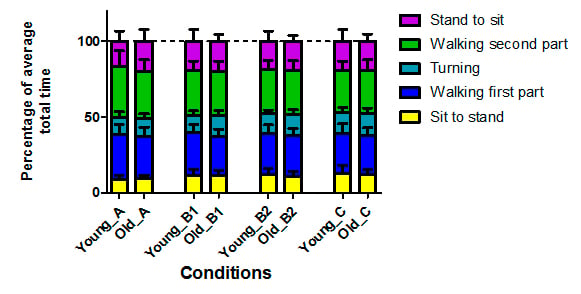 The aim of this study was to provide a normative data set that was rater independent, due to the use of an automated quantitative analysis method. This allows for a direct comparison of patient’s results within and between researchers and/or clinicians.

In general, speed of performance has a direct effect on TUG performance and is dependent on age. The component times can provide important additional information that cannot be gathered from the overall TUG outcome. The normative dataset presented in this study can be further validated by future studies. We recommend instructing people to go quick and safe, while using a cone to mark the turning point in order to differentiate between less able and more able people or patients. Automated timing methods, such as by seat pressure sensors or by simple single sensor accelerometry, should be used for more accurately determining start and stop times.
Part of this study has been published.