Graduate students from Colorado State University’s occupational ergonomics and safety program in the department of environmental and radiological health sciences - with the support of Odell Brewing Company - have done research on how low back motion changes as an effect of workstation layout when handling kegs. The occupational ergonomics and safety lab focuses on exposure assessment field studies, with an emphasis on musculoskeletal disorders and perceptions of ergonomics climate. Xsens MVN Analyze allows researchers to study worker movements in the actual work environment. Research was able to be conducted in an actual brewery due to the latest Xsens Estimation Engine (XEE) which removed ferromagnetic interference from structural beams and machinery. Ferromagnetic structural materials and industrial equipment would typically be a limitation to utilizing sensors with a magnetometer, however, the magnetic immunity component of the IMUs enabled successful data collection to occur in the actual brewery. 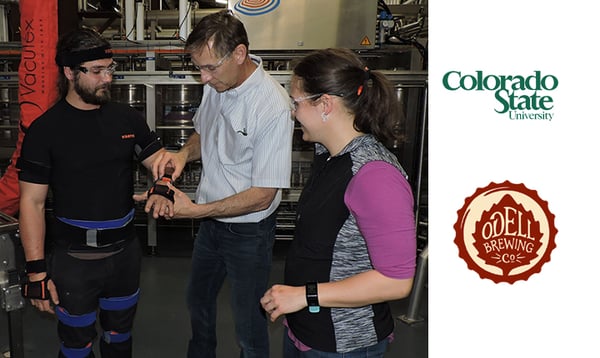 Biomechanical risk factors such as heavy loads and awkward trunk postures have been associated with occupational low back pain. Those same risk factors are commonly experienced among workers handling beer kegs. Small breweries in the U.S surged from 1,500 to 5,000 businesses between 2006 and 2016. These small breweries have been very successful; as of 2015, the craft beer industry represented over 20% of the $105.9 billion beer market in the U.S (Beer Institute, National Beer Wholesalers Association, 2015; Brewers Association, 2016). Many of the breweries are small and lack resources for materials handling equipment. These limitations cause much work, including keg handling, to be done manually.

The present study used Xsens MVN Analyze as a tool to investigate the low back biomechanics during keg handling at Odell Brewing Company. Specifically, five workers transferred spent kegs from a pallet to a conveyor to be cleaned and filled with beer. Spent (empty half barrel) kegs weighed approximately 13.5kg. If kegs were full (weighing up to 72.8kg), the brewery had a lift assistance policy. Data was collected during the portion of the individual shift workers handled kegs. Low back angular displacements were assessed during keg handling at two heights. Lumbosacral joint angular displacement output from the Xsens biomechanical model was used in the present study. Kegs originated from a high or low position and were defined as high or low lifts. Kinematic data from the study was used to estimate compressive and shear forces at the lumbosacral joint. Repeated measures analyses were performed with each low back angular displacement variable as a function of lift condition.

Differences in low back biomechanics between lift conditions were identified. During low lifts, torso flexion was significantly greater than high lifts. The magnitudes of lumbosacral flexion achieved during low lifts significantly exceeded those of high lifts (an average of 6.3 degrees during high lifts and 10.2 degrees during low lifts). A broader range of angular displacements was observed in high lifts, meaning there was more variation in low back motion when workers handled kegs from the high position (high lift lumbosacral flexion varied from 5.9 degrees to 14.2). In both conditions, upper limits of estimated kinetics exceeded recommended action limits, potentially putting workers at an increased risk of developing low back pain. Mean estimated shear forces exceeded 500N during low lifts (667N) (Gallagher and Marras, 2012). The maximum estimated compressive force during high lifts exceeded the recommended 3400N (4700N) (Putz-Anderson et al., 1997; Waters et al., 1993). Based on task analysis, less than 6% of the worker’s shift is spent directly lifting the kegs onto the conveyor roller. The majority of the worker’s time is spent managing the kegging line: operating the machinery, removing labels from kegs, maneuvering pallets, and checking tank pressures (to name a few examples). This low duration of the direct keg handling is a protective factor for occupational low back pain. During a busy shift, a worker may handle 600 spent kegs (weighing 13.6 kg empty and 72.6kg full). Further research in other postures and movements brewery workers experience during a typical shift is recommended.

In the present study, postures and movements required to lift kegs were characterized. Data collection was feasible during operational hours due to the portability and small design of Xsens IMUs. Data collected from experienced workers provided researchers with information directly applicable to keg handling in small breweries. Low back kinematic data established a baseline assessment and can be used to assess workplace design intervention effectiveness. Results from the study can help improve workplace design in a craft brewery, reduce risk, and create safer work. Since the completion of this study, Odell Brewing Company has modified their warehouse practices to further increase safety and efficiency of the keg line by installing wide-angle mirrors and fine-tuning forklift operations for delivering kegs on pallets.