The Vancouver-based Image Engine has achieved renown for its body of work in the creature creation space, from the Academy Award-nominated ‘prawns’ of District 9 to the velociraptors of Jurassic World.

Part of the allure of these creatures is the realistic locomotion that drives them. Via lithe, organic movement these animals and aliens are infused with a tactile physicality, even though – in reality – they’re completely digital creations.

To achieve this naturalistic look, Image Engine’s animation team often turns to the ease and efficiency of Xsens MVN motion capture suits. By donning MVN equipment, artists can quickly capture mocap data without the need for professional actors or an expensive set-up. Once the performance is complete, the team runs the captured data through the studio pipeline, ultimately using it to drive the movement of the creatures witnessed on screen.

This approach came in particularly helpful on two recent projects and their central digital creations – the ominous invaders of Independence Day: Resurgence and the colossal knights of Final Fantasy XV: Kingsglaive… 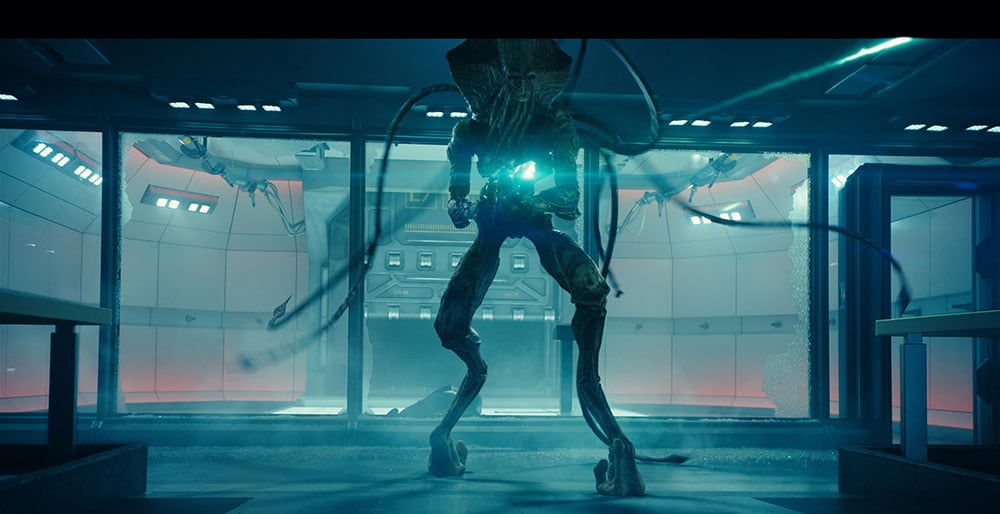 Alien invaders & knightly protectors
In Independence Day: Resurgence, the extraterrestrial invaders of the 1996 film return to wreak vengeance on the humans that prevented their original attack. Led by animation supervisor Jason Snyman, Image Engine delivered 170 challenging shots across Resurgence’s runtime, from alien plant life and technology to the creatures themselves.

Although the practical puppetry of the first film is replaced here by high-end visual effects, director Roland Emmerich wanted to retain the tactile feel and motion of the 1996 film’s real-life models – from whipping tentacles to body language and stature.

To achieve this, the animation team developed facial rigs to control subtle breathing deformations that create a naturalistic level of detail in the aliens. Animation also created an artist-controlled simulation solution that could drive the frenzied motion of the tentacles while still allowing for keyframe control.

To drive the alien’s overall body language, however, Snyman and team turned to Xsens mocap technology: “There’s a nice connection between the 1996 film and the 2016 sequel, in that despite the two decades of digital evolution, both alien performances were created by a guy in a suit!”

Kingsglaive posed a different challenge: here Image Engine’s animators were faced by a 23-minute sequence of full-CG, during which two colossal knights battle across an epic cityscape. Animation supervisor Jeremy Mesana led the charge here, powering the animation of the huge knights throughout the screen-shaking final act.

Again, the animators adopted Xsens mocap suits into their workflow, enabling them to deliver quick and effective animation across the sequence without sacrificing on quality.

Mocap anywhere
While working on the projects, Mesana, Snyman and their team of animators jumped into Xsens MVN mocap suits on an almost daily basis. The team would quickly capture animation or blocking reference, which would then be translated into the movements of Independence Day’s extraterrestrial exoskeletons and Kingsglaive’s armoured behemoths.

A major benefit of this approach – aside from the quick and simple delivery of animation – was that the MVN suits worked in most areas of the Image Engine studio with little interference. The team could venture into any open space in the studio and capture the data that they needed for that day’s deliverables.

“There are photos that should not ever exist of me wearing the spandex suits around the office,” laughs Snyman. “I received some very funny looks while running around with my serious face on, acting like a scary alien with a plastic gun. But silliness aside, it was a great way to quickly block out that animation – and all without the need for a prohibitively expensive mocap shoot.”

Playing rough
Although Image Engine’s entire studio has access to the suits the animation team are naturally the biggest users – not least due to ease of setup.

“Setting up the Xsens suits is so simple – most of our animators know how to do this themselves, so we don’t need a specialised tech when we want to quickly jump into a session,” says Mesana. “Once we’re done we simply export motion as an FBX skeleton out of Motion Studio, and from there we can import straight into Maya and re-target by driving our rigs with the FBX skeleton. The team can adjust the animation to meet the physiology of the characters or creatures in question, such as extending limb length.

“Thanks to the ease of use anyone can quickly grab a suit and record their data,” continues Mesana. “We of course have to ensure that everything is working in harmony – you don’t want to get the left sensor confused with the right, for instance – but compared to a traditional mocap set-up it’s a walk in the park.”

Some performances would get a little more aggressive than a simple stroll: the team even brought in big crash pads for some of the more dynamic performances in Kingsglaive.

“At some points, we were using the suits quite aggressively, performing some crazy, hard impact actions – basically doing our own stunts!” says Mesana. “To make sure we captured good data we strapped down some of the sensors, which made for stable filming. We also recalibrated after every shot to make sure we were capturing solid data. It enabled us to get some great action reference that fed into the final feature.”

Quick turnaround, quick creativity
Image Engine’s animators develop anywhere between five and ten ideas at a time during Xsens MVN sessions, exploring different approaches to even the subtlest of motions.

“If someone has a crazy idea they want to try then we can quickly shoot the data and have everyone back at their desks within an hour,” says Snyman. “Film production is a demanding business, so being able to get ideas in front of our clients within a week – instead of having to waste days on an idea that potentially wouldn’t work – is a huge benefit.”

Thanks to the ease-of-use, cost-saving functionality, and quick and simple access to creative exploration, Xsens MVN mocap suits are sure to play a key part in many of Image Engine’s future productions.

“Xsens has updated their software not once but twice since we brought the suits into the office,” concludes Snyman. “If these high standards continue, the technology will remain useful for years to come.”