At the highest level of sports, it’s often the smallest details that separates the winners from the runners up. Athletes and the teams around them dedicate hundreds, if not thousands, of hours preparing to compete: researching the best ways to change their diet, routine and performance in the hope it will give them the edge over their opponent. Advancements in biohacking mean that athletes are no longer competing against one another, but also against coaches, data scientists and research teams who are constantly on the lookout for the latest tools they can use to enhance their athletes’ performance.

In the case of helping Ryōyū Kobayashi in the 2022 Winter Olympics, Professor Keizo Yamamoto of Hokusho University turned to motion capture technology. The tech-first strategy ultimately proved a success, with Ryōyū Kobayashi picking up the gold medal in the men's normal hill individual ski jumping final.

We spoke to professor Keizo Yamamoto about how he used motion capture as part of the research process, why he chose Xsens, and how the technology could be used in other sports in the near future.

It takes an Olympic village…

Professor Keizo Yamamoto of Hokusho University is well versed in analyzing the movements of athletes. As well as specialising in kinematics at the university’s Faculty of Lifelong Sports, professor Yamamoto has worked closely with athletes at the Japanese Olympic Committee. 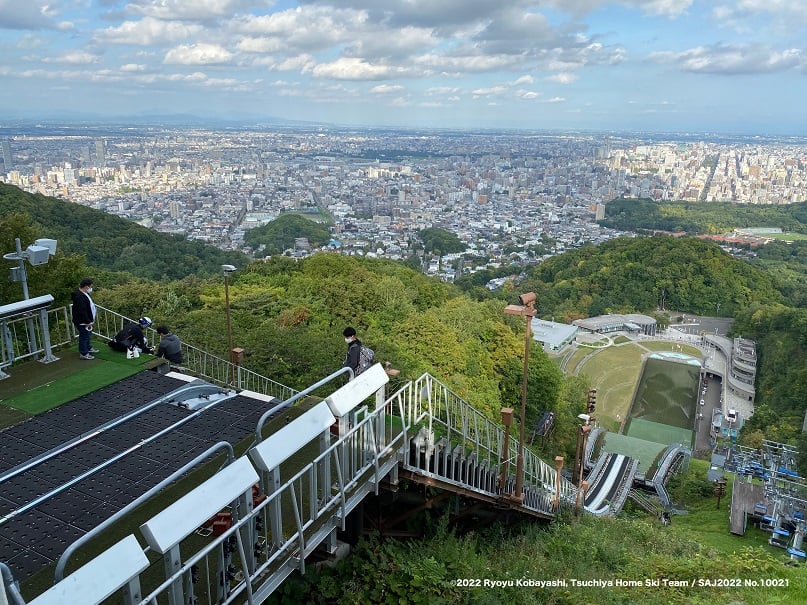 “Since 2008, I have been supporting athletes at the National Training Center (NTC) in Sapporo, Japan, as a scientific staff member of the Ski Jumping Training Center. In addition to physical training, NTC provides a wide range of support to athletes, including performance evaluation, nutritional guidance, as well as medical and psychological support from medical doctors. I am in charge of performance evaluation, which involves assessing posture and movement from a biomechanical perspective.”

With the 2022 Winter Olympics on the horizon, Professor Yamamoto and his team looked for ways they could capture the athlete’s high performance, and use that data to improve the performance of the whole team. In 2019, they first decided to use motion capture, and Ryōyū Kobayashi was the ideal research candidate. Coming off the back of the 2018/19 FIS Ski Jumping World Cup, Ryōyū Kobayashi had picked up a total of six trophies, including the top prize of overall winner. Kobayashi was one of the favorites at the forthcoming 2022 Winter Olympics, which is why professor Yamamoto was keen to analyze his performance, and help Kobayashi take him to the next level.

“Ryoyu Kobayashi won the overall World Cup title in the 2018/19 season. We asked him to help us analyze the performance of the world's top athletes, as we thought it would be a useful resource for coaches and other athletes. He graciously agreed.”

Ski jumping is a unique sport in that athletes are only able to practice flying a limited number of days a year, due its relation to specific weather conditions, and the impact that the movements can have on the athletes. With motion capture data, the athletes and coaches would have access to a rendering of the performance. Essentially, they could replay the jump in full without having to worry about waiting for snow, or causing stress on an athlete.

Professor Yamamoto needed motion capture technology that was robust enough to capture the complexities of the jumper’s movement,and also lightweight enough to not interfere with their performance. For this, they turned to Xsens.

An excellent performance is often attributed to an athlete's ability to remain in a positive mental state, in which they are entirely connected to, and feel in control of, their performance. In the ESPN documentary series ‘The Last Dance’, Mark Vancil, author of “Rare Air,” discusses Michael Jordan’s psyche: “He was never anywhere else… his gift was not that he could jump high, run fast, or shoot a basketball. His gift was that he was completely present. And that was the separator.” Similarly, it was paramount that Kobayashi could remain mindful of his movement, not the mocap suit he was wearing, and it was the wearability - as well as the accuracy of Xsens’ data- that led to Professor Yamamoto opting for the technology. Kobayashi’s recorded jump would be the standard by which the NTC would measure other ski jumpers; it was essential that he was able to perform in his natural state. 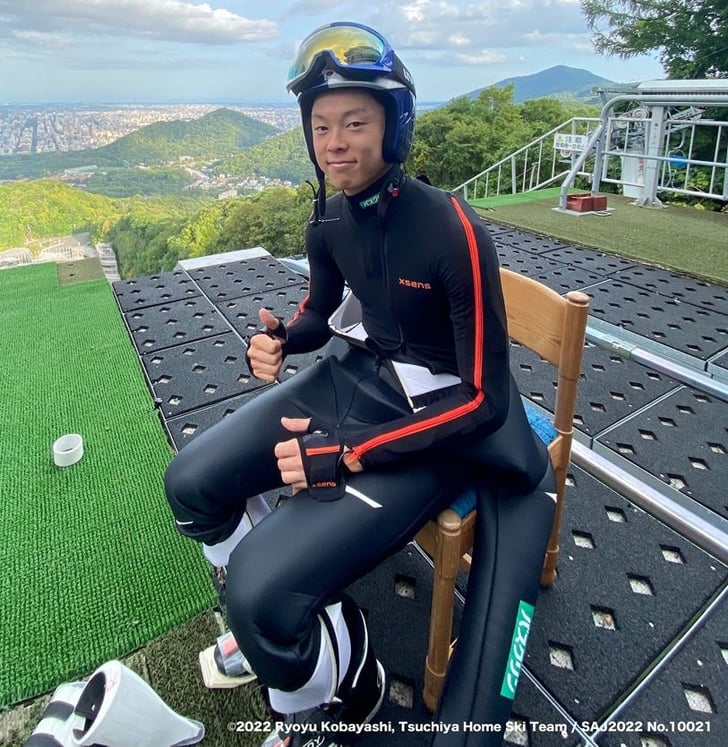 “The art of the millisecond is an omnipresent factor in ski jumping.” Professor Yamamoto explains “Airflow and aerodynamic forces can be greatly affected by even the slightest change in posture. The purpose of our research is aerodynamic analysis. We needed a system that could measure the athlete’s posture with high precision. We chose Xsens because of its accuracy and the overall weight and size of the system.”

Athletic gear at the highest level is designed with advanced technology: from technical materials to grams of weight, these differential factors aren’t just costly to training budgets, they can cost micro measurements in performance. It was imperative, therefore, that the mocap gear could work adaptively to the athlete’s high tech suit. “We were looking for a chip based, Inertial Measurement Unit (IMU) sensor type mocap system for years because ski jumpers wear suits, so bulky marker-based mocap suits that are traditionally used for movies would prove difficult for the jumpers”.

Ski jumpers are required to wear a skin-tight suit, with jumpers in the past being disqualified for wearing a suit that fails to have “sufficient air permeability”. The MVN Link suit that Ryōyū Kobayashi wore for the trail jump closely resembles the ski jumping suit that he would wear in competition, and meant that there wouldn’t be any extra weight that the research had to account for, or change how Ryōyū Kobayashi would approach the jump. Professor Yamamoto shares, “so marker based mocaps are difficult. We considered various manufacturers, then chose Xsens MVN for the reason that it can accurately measure the posture of the jumper and the ski-boards. Athletes must wear the device and jump - so high, that we refer to it as flying! We needed a system that is as light in weight and small in size as possible. Xsens met all these requirements.” 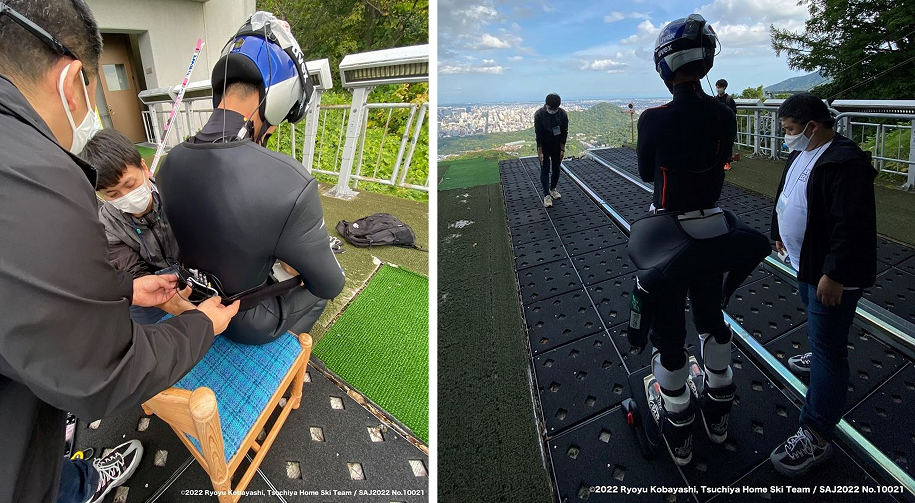 Even once Ryōyū Kobayashi was comfortable with the Xsens suit, there were other conditions that threatened to impact the research jump, professor Yamamoto explained: “It was difficult to coordinate the measurement schedules of the athletes and staff. Ryōyū Kobayashi's schedule was always full, so we gave top priority to his schedule. We also had our fingers crossed for the weather, as we have had to cancel measurements in the past due to wind or rain. No one can control the weather. Fortunately, the weather was fine, and we were able to make the measurements without any incident.

With the Xsens suit on, they were able to continuously record the movements of Kobayashi. From this, Professor Yamamoto converted his movements into data, which was then transformed into a 3D rendering that was analysed through Fugaku, the world's fastest supercomputer.

With the data recorded, Professor Yamamoto and his team then set about identifying the key takeaways from the jump.

“After performing an aerodynamic analysis of the time-varying jumper posture, we identified the aerodynamic characteristics that were seen across top athletes. By clarifying the fluid characteristics during a series of jumping motions, it is possible to objectively explore the critical aspects of performance. Two athletes participated in this project, so we were able to analyze jumps of different forms.”

Motion capture data allowed the team to look at detailed air movement, and were then better able to point out the unique movement patterns that set Kobayashi apart: “I was surprised to find that the lift-drag ratio rapidly increases immediately after takeoff”, exclaimed Professor Yamamoto. “Lift-drag ratio is an indicator of flight performance in ski jumping. It is important for performance to form an aerodynamically advantageous flight posture as early as possible.”

Lift drag ratio rapidly increasing immediately after take-off; Kobayashi’s movements meant he was able to decrease the impact of this pressure and therefore gain advantage over other athletes

Once they had summarized their findings, Professor Yamamoto presented the data to Kobayashi and other athletes.

Future of skiing and beyond…

Ski Jumping is a unique sport. Aerodynamic movements are at the core of this sport, so it can be challenging for an athlete to visualize what actions they need to take while in the air. However, with the help of motion capture, this is easier to understand, as Professor Yamamoto explains: “Ski jumping is a flying sport. Therefore, it is essential to analyze aerodynamic characteristics in order to evaluate performance. By visualizing the invisible air flow and aerodynamic forces, it is possible to explain the data much easier to the athletes. I believe that this will facilitate communication between athletes and coaches and improve the quality of training.”

We’ve seen runners, golfers and tennis players alike use Xsens to enhance their performance, and Professor Yamamoto speculates that there could be further use in the near future. “I think mocap research is definitely effective. It is less stressful on the athlete and allows the movement to be recorded in places where a video camera cannot. As for fluid analysis, this technology will be useful in sports where fluid forces dominate, such as swimming.”

Motion capture technology has opened up a new way of thinking about movement for coaches and athletes. Rather just thinking about how they should move, they can use technologies such MVN Analyze to study why they move the way they do. As Remco Sikkema Senior MarCom Manager at Movella, elaborates, “An athlete's movements can be so individualized that it is difficult to generalize based on the data from one athelete. With that being said, there is great value in understanding your own capabilities and restrictions as an athlete. The use of motion capture in sport grows year on year, as athletes and coaches seek to understand their movements better than ever before.”