The effect of different shoes on aiming and shooting in archery

Archery is an interesting competitive sport. Archers need strength as well as the ability to concentrate in order to aim and shoot successfully. In the process of shooting, the archer draws the bow, pulls the arrow to what is called a “clicker”, fixes the arrow in position and aims. Then he pulls the arrow back so that clicker slips over the arrowhead. This is called the final pull. Finally the archer releases the shot. Throughout the whole aiming and shooting procedure it is essential that the archer remains extremely well balanced. One aspect of maintaining good balance is the type of shoe being worn. The aim of this research is to help athletes to choose the most appropriate shoes for optimal balance, to ensure good aiming and shooting.

Eight archers, members of the Slovenian National Archery Team participated in the study. Each of the participants conducted 18 shots: 6 shots barefoot, 6 wearing indoor and 6 outdoor shoes. Full body 3D kinematics were recorded Xsens MVN Analyze 3D Kinematic Measurement System (Figure 1: Archer wearing the Xsens MVN 3D Kinematic Measurement System and standing on the AMTI bilateral force plate using indoor shoes). An additional prop MTx motion tracking sensor (supplied together with the MVN BIOMECH system) was attached to the bow and was connected directly to the suit in order to detect release time via acceleration and the bow movement. The sampling frequency was set to 120 Hz and the MVN accessory camera (Prosilica GigE GS650) was used to record the video for easier analysis. In addition, a high speed camera Casio Exilim Ex F1 was used for more detailed video analysis and it was set to 300 Hz sampling frequency. For better lighting conditions a professional movie studio reflector was pointed to the same direction as the camera. The ground reaction force distributions and movement of the centre of pressures for each leg were measured with an AMTI bilateral force plate (Figure 1). According to literature, three time phases were defined covering the time from three seconds before the release and one second after the release of the arrow: -3 to -1 s, -1 s to release (release time was set to zero time) and from 0 to 1 s. 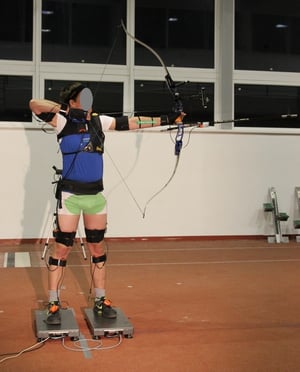 In total, 20 parameters for each archer at three different time frames were analysed in the study. Similar types of diagrams were plotted for each parameter as shown in Figure 2, where anterior-posterior movement of the centre of mass is shown. In this example, the dispersion (standard deviation) of data for barefoot shooting was the smallest and the highest dispersion was found for the outdoor shoes. However, the mean position of the centre of mass was the most repeatable throughout the trials using outdoor shoes. The athlete’s centre of mass moved consistently and mono-directionally in the posterior direction using indoor shoes between – 3 s and -1 s and was relatively steady during the last second before the release.

In general, three different types of movement patterns were observed with much individuality. Furthermore, footwear did not result in a consistent effect on archers’ body movements. Therefore the feedback provided was on an individual basis, to each archer, depending on the footwear most suited to the individual.
Matej Supej
assoc. prof. Ph.D. Matej Supej B.Sc.(Phys.)
Head of Laboratory of Biomechanics
University of Ljubljana
Faculty of Sport, Dep. of Biomechanics
e-mail: Matej.Supej@fsp.uni-lj.si 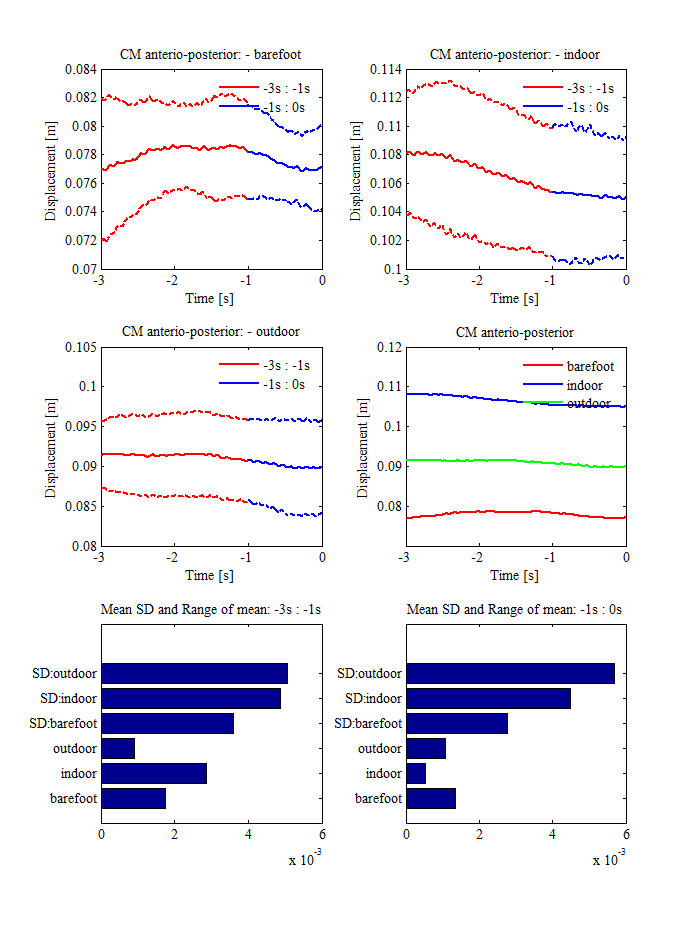