Motion Capture Supervisor Simon Kay talks about the use of Xsens at Double Negative in their pipeline:

"Being based in a studio in the centre of London means space is at a premium for us. Having the ability to install the Xsens MVN system quickly, without the need to dedicate an entire room to a mocap system, is a huge advantage for us. The quick and easy set-up means we can install the system and get an animator in a suit, calibrated and ready to capture in under 20 minutes. And once the session is finished, the entire system can be packed away into a single Peli-case and stored at the side of my desk. This portability and ease of installation also allows us to take the system on-set and capture in locations it wouldn't normally be possible to with an optical system. Requiring little more than a table and power supply, I’ve been able to capture in locations varying from a 3m x 3m tent on a sound stage to the edge of a wood in the middle of the countryside. Another major advantage for us is the ability to export the raw mocap data out of the software at the end of the session with almost no additional processing. This means the data can be delivered back to the animators quickly, giving them more time to work on their animation.

We normally use our MVN System on projects that require CG characters. This could be during the pre-production stage for pre-viz and character development or later during post production to create animation for the main hero and background characters. A typical MVN session at the studio usually takes place in the morning and last around 2 hours (or until we break something or someone). Usually the animator will get in the suit themselves and perform the actions they want for the shots they’re working on. To help them visualize what their performance will look on the character, we also stream the data in real-time on to the character in MotionBuilder.

After each take the animator will review the performance either in MVN Studio or MotionBuilder to decide what changes they need to make. Sometimes they'll capture one version of every action in a sequence to block it out quickly. Other times they'll spend the entire session capturing multiple variations of a single action to give the director with as many creative options as possible. Once the animator has captured everything they need, the system is packed away and all the mocap data is exported from MVN Studio. This data is then remapped from the MVN Character onto the CG character using MotionBuilder, ready to be imported into Maya for review and editing that afternoon. 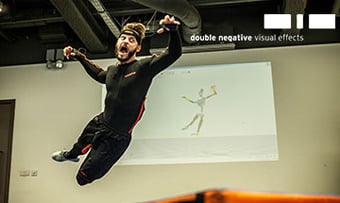 Over the last 7 years we've built an excellent working relationship with Xsens. From the beginning, they’ve actively invited feedback from us and we've seen many of our requests and suggestions implemented in the latest version of the MVN System and MVN Studio. Xsens continually visits the studio to better understand the way we use the system and keep in regularly contact with all the latest updates and developments. Any issues have been fixed with a Skype call or, in the rare cases of equipment failure, they've arranged a replacement or loan equipment within a couple of days.

Since upgrading to the new system, we've seen an improvement in the accuracy of the data, especially with foot-floor-contact and the new multi-level capture capabilities. For us the easy installation and fast turnaround time far out-weighs any minor reduction in accuracy we might get with this type of inertial motion capture system.

Over the years the MVN system has proved a valuable tool for creating large amounts of blocking animations in a very short space of time. The quick capture and processing time gives the animator the opportunity to test multiple ideas for their shots. Then select the best examples and with minimal tweaking, create a clear blocking pass ready for feedback. Once the actions are approved, the animator now has more time to spend on their animation, with the added benefit of the MVN data providing the perfect 3D reference."