IBV  (Instituto de Biomecánica de Valencia), is a technological center that studies the behavior of the human body during its interaction with products, environments, and services. Focusing on Ford’s production line in Valencia, the team used Xsens MVN Analyze to research the use of Novel exoskeletons by workers—the research will be used by Ford to determine the extent of their application in the factory. We spoke to Israel Benavid, Ford Engineer, and Juanma Belda Lois, IBV’s Senior Researcher, about the recent study they conducted.

Ergonomics is an important consideration for most businesses, but industries that require heavy lifting in mechanical environments have an increased risk of disrupting worker-safety. Creating machinery that can enhance the performance of a worker is one route to an ergonomically safer workplace.

Exoskeletons are mechanical wearables designed to support or enhance human anatomy, ranging from full suits to limb-specific functions—for example, a mechanical arm could be worn to increase grip. By wearing an exoskeleton, workers can obtain a range of potential benefits, such as less muscle fatigue, and an ability to reduce repetitive, strain-related injuries from stress. But like all mechanical technology, any risks and benefits need to be assessed before use.

“We wanted to find ergonomic solutions for our staff and decided that exoskeletons could be a viable option in the production line. We needed an in-depth analysis of the exoskeletons to determine where they could be used, employee positioning, and most importantly, the biomechanics of the users,” explained Israel.

“When we initially started using the Xsens suits, we were quickly satisfied with the results because there wasn’t any signal interference between different devices and machines. With previous motion capture suits, this was a significant problem.”

With inertial motion capture technology, researchers were able to assess the workers using the suits directly on Ford’s production line, resulting in biomechanical data being captured from real working conditions. The researchers use other pieces of equipment alongside the Xsens suits—such as EMG Instrumentation—to obtain data, as Juanma explains:

“We ran a trial using EMG Sensors and Xsens systems—they worked well in naturalistic conditions. The measurements were great for the conditions and we decided to measure the workers with the Xsens suits.”

EMG refers to Electromyography Wireless Sensors, they can pick up the electrical activity within the muscles themselves, determining muscle tissue contractions and muscle activation. With the added kinematic data obtained using inertial motion capture, IBV can produce results with even greater depth.

“One of our aims was to be able to create a biomechanical model of the workers performing the activities getting information from the user’s muscles with a greater analysis of movement too. We use Xsens for kinematic analysis,” said Juanma.

Once the users are wearing the Xsens sensors, the researchers can obtain various kinematic measurements, such as the range of motion (ROM) capable by each person. In the case of ROM, only small variations were found when compared to workers not wearing the suits—the only reductions in muscular function found whilst operating the suits were a minimization in the lateral movements of the user’s neck and back, and reduced arm supination.

One factor that the team tested for was ischemia, the lack of blood flow to certain limbs or organs. When working on the underside of a vehicle on the production line, employee’s arms are often held upwards for extended periods of time, potentially harming blood flow. This also affects muscular activation and motion too, but the researchers found positive results:

“When using the suits, we found that workers could change their strategies. For instance, the exoskeletons helped support the users when bolts were screwed on the bottom of a car. We found a reduction in the activation of the deltoid and trapezius muscles. This is good because these muscle groups are in the warning area for ergonomics,” explained Juanma. Once the data from the research has been recorded, Juanma’s team can use software to analyze and model the findings into tangible conclusions.

“We use the complete suite that Xsens MVN Analyze provides for the majority of our analysis. But we also need to complete a separate analysis of the shoulder muscles that meet the International Society of Biomechanics standards—for this, we built our own libraries in Python,” explains Juan. 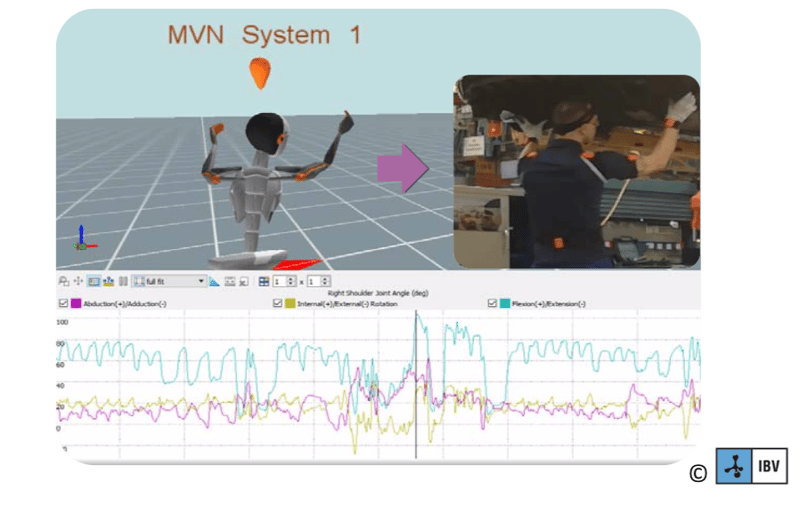 IBV has utilized motion capture for a range of movement-based research, making it a core technology in their facility.

“I’ve been working in movement analysis for about 25 years. At IBV, we’ve used the Xsens sensors for the last 2 years, with this project taking place one year ago—the Xsens measuring units are great for measuring in natural conditions.”

“Currently, we are running another project with lumbar exoskeletons funded by a grant from the Spanish foundation of work health. We ran the first pilot measurement recently, with more pilots to come—we’re excited to carry on using inertial motion capture in our studies,” exclaimed Juanma.

With plenty of biomechanical research to conduct, both IBV and Ford will be looking to continue fine-tuning worker environments and improve the ergonomics of workers on the production line with inertial motion capture.