On August 2009, 18g Xbus kit from Xsens Technologies B.V. and a software implementing ISEO, a protocol developed by INAIL Prostheses Centre (Vigorso di Budrio, INAIL), for the functional evaluation of the upper limb was provided to Dr. Porcellini staff (Cattolica, Italy) for the new baseball motion capture project based on Xbus System. The experience in Chicago was carried out through the collaboration of “Ospedale Cervesi di Cattolica” (being Dr. Giuseppe Porcellini the director) and the Sport Medicine Unit of the department of Orthopedics and Rehabilitation of Loyola University Hospital, Chicago (being Pietro Tonino the director). The baseball teams involved in the study are: Rimini Baseball Team (IBL, Italy) and Triton College, first division of the national tournament among colleges in the USA.

The aim of the baseball project was to perform a real-time tracking of the scapula movement for baseball pitchers, starting from the 18g Xbus system by Xsens Technologies B.V. and the upper limb functional evaluation protocol described and validated in Cutti et al. [1-2].

During the experience of Chicago the objective was to demonstrate that after the pitching and the resulting stress for the upper limb joints, the scapula loses its ability to follow the humerus movements in the extreme ranges of elevation. This is typical for the sports involving overhead movements.

Methods
Three (3) baseball pitchers (20 ± 2.6 years-old) participated to the study. All the pitchers signed informed consent. The protocol described in [1] was adopted.

The areas for the set-up of the thorax and scapula units were first cleaned and then the units positioned using a Fixomul Stretch over the skin and double-sided tape between the unit and the Fixomull.

The humerus and forearm units were positioned using the new “MVN straps” for motion capture.

The coordination between the scapulo-thoracic and humero-thoracic joints, called scapulo-humeral rhythm (SHR) and the humero-thoracic external rotation (EXT) were evaluated before and after 60 pitches. SHR was calculated during simple movements, flexion-extension (FE) and abduction-adduction (AA) of the shoulder, while EXT was calculated during internal-external rotation movements (IE) when the humerus is 90 degrees abducted (Figure 3). The subjects were asked to repeat the movements 5 times. The same evaluations were then repeated after 24 hours. For each subject, the ROM and pattern of SHR and EXT during each session of measurement (3 sessions S1, S2, S3) were compared each other.

Results
Subject 1 presented consistent ROM in all the degrees of freedom and movements examined, indicating no particular shoulder alterations due to the pitching. Subject 2 presented higher range in IE in S2 compared with S1, during IE movements. However, the starting range was restored in S3. Similarly, during AA movements, for the ROM of AA. Moreover, the movements of the scapula (ML and PR) were reduced in S3 with respect to S2, indicating alterations occurring between S1 and S2, and an improvement in the SHR after 24 hours (S3) (Figures 4-5). Differently from the others, in subject 3 the external rotation was still reduced after 24 hours. Furthermore, FE and AA were reduced in S2 in the attempt to compensate this effect increasing the scapula movements. This behaviour is maintained after 24 hours (although the ROM increased), indicating an evident alteration in the shoulder kinematics.

Discussion
The measurement system presented here is completely portable. The results are promising, being the system able to visualize and monitor alterations in the shoulder kinematics, starting from the measuring of simple shoulder movements. However, larger population of pitchers are required to confirm the capability of the system to discriminate among different alterations and/or injuries occurring in the players.

The overall system showed to be non-invasive and reliable during all the measurements. This demonstrated that baseball activity could represent a new application of the portable Xbus system and the upper limb protocol from INAIL.

[2] Cutti A, Garofalo P, Parel I, Fiumana G, Porcellini G. Intra- and inter-rater reliability of the scapulohumeral rhythm measured by a protocol based on inertial and magnetic sensors. Gait & Posture. 2009;30:S17 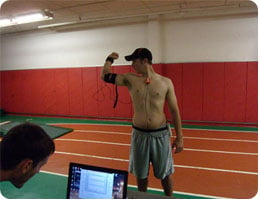