The Nuon Solar Team, winner of the Bridgestone World Solar Challenge, used the Xsens MTi-G-700 to validate the aerodynamic design of their solar car Nuna8. Prior to the race, two aspects where investigated during test runs in Australia. The Xsens motion tracker turned out to be a great substitution of the more expensive windtunnel tests.

The competition in solar car racing has taken a leap in the last challenge in Australia. The first 5 vehicles finishing within one hour from one another in 31 hour race. Only because Nuna8 was designed to its limit, victory was possible. From an aerodynamic point of view there are two issues of great concern with engineering on these levels.  The first is the aerodynamic stability, Nuna8 should always remain with four wheels on the ground, even in the strongest winds. Dynamic pitch is the second concern, there could be large differences between the static attitude and the attitude at cruising speeds.

Nuna8 is designed for a specific driving attitude with respect to the flow direction to ensure a nose down behavior of the vehicle. This means that the pressure distribution on Nuna should be such that her nose is slightly pulled towards to road. If the nose would be slightly pulled upward at higher driving speeds there is a change that the solar car would flip over, just like a powerboats sometimes do. A risk which cannot be taken in solar racing.

Small deviations in attitude between design and reality will results in a significant increase in aerodynamic drag.  Using the suspension of Nuna , the mechanical engineers are able to fine tune the pitch of the vehicle. Unfortunately the suspension can only be adjusted when Nuna is standing still. It is known that at cruising speeds the pressure distribution exerts forces which will change the carefully adjusted pitch. However, simple visual detection of the pitch change will not be possible as they are too small.

The measuring accuracy of the MTi-G-700 tracker is 0.2 degrees. This means that a real-time pitch attitude can be measured with sufficient accuracy. However, the uneven surface and inclination of the road is much larger than the expected change in dynamic pitch. Therefore, the road surface influence was taken out of the equation; by driving Nuna on the same road twice. One time at 25 km/h, a speed at which aerodynamic influences are minimal and at which the pitch angle of Nuna would not differ from the static road pitch. The second run was at cruising speed, 90 km/h. The measured pitch of the two test runs is depicted in the figure. 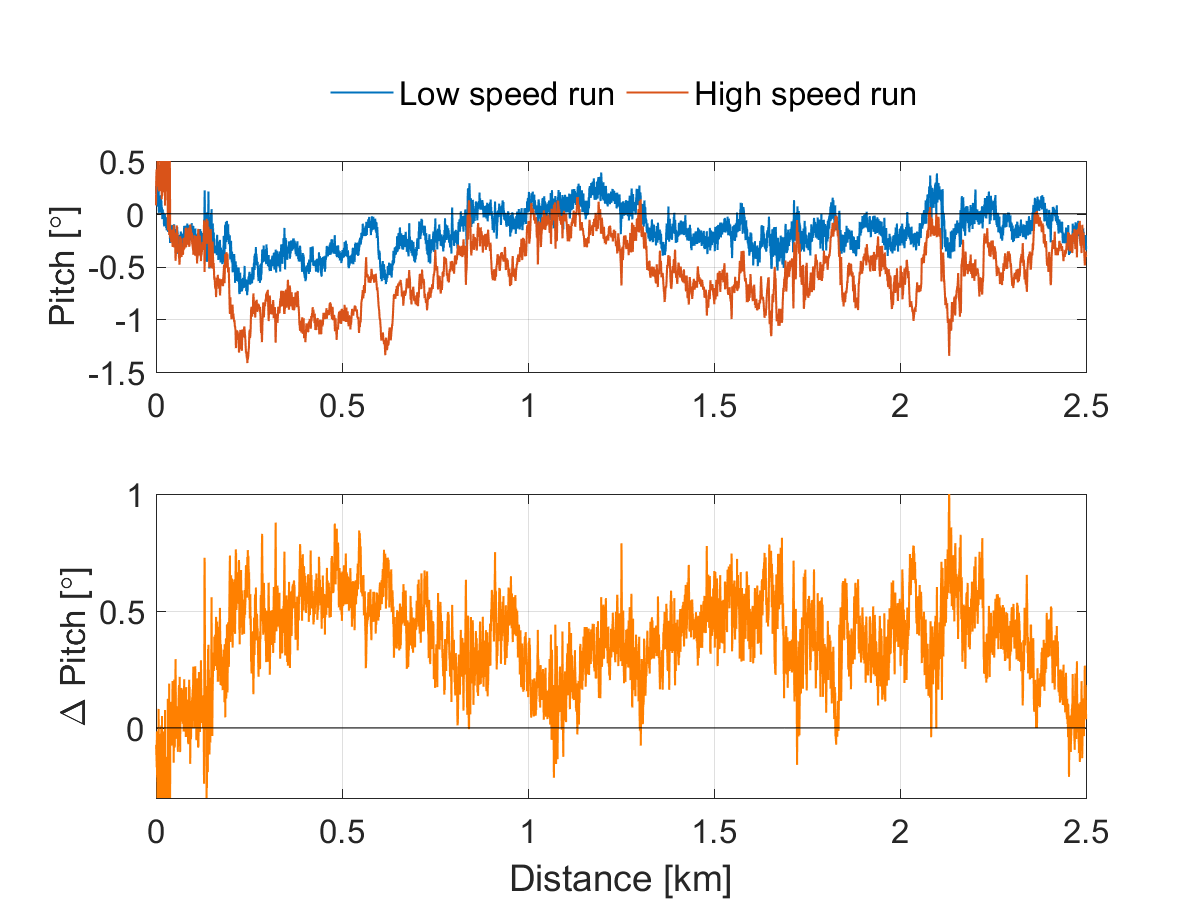 No conclusions can be drawn from the two individual runs, but the difference between the pitch angles shows a clear deviation in pitch angle. Based on these results two conclusions can be drawn: With increasing driving speed the front wheels of the car will be pushed stronger on the ground, ensuring stability just as designed.
Also the pitch at cruise speed deviated too much from its low drag design point and was therefore readjusted using the vehicle suspension.