Last week Xsens hosted the Asia-Pacific distributor meeting at the beautiful office of Zero C Seven in Tokyo. The meeting took place in coincide with Siggraph Asia, also in Tokyo.

Together with our colleagues from management, sales, support and marketing we shared the latest developments and plans for the future. It is important to include our distributor partners in Xsens' growth strategy as they will play an important role. Thanks to the local knowledge and contacts of these partners, our footprint in Asia-Pacific will become much stronger. 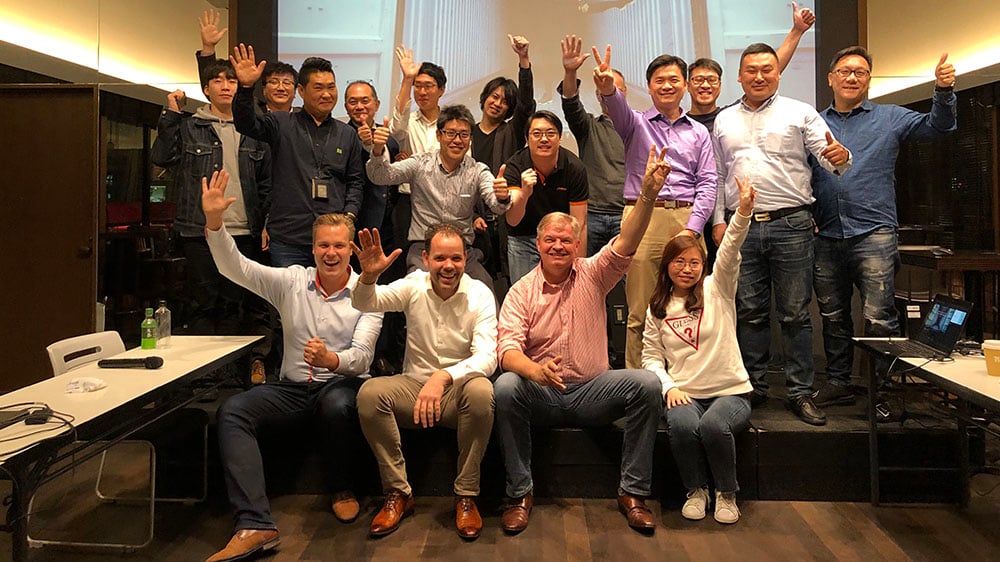 After many years, this was the first time Xsens' exhibited at Siggraph Asia. And we were sure to make it count. Next to the live demonstrations at our booth, we hosted a session together with Zero C Seven's customer SEGA Interactive. We were also featured in many sessions, posters and during the much anticipated Real-Time LIVE session.

Live demos
During the three exhibit days we hosted hourly demonstrations on our booth, showing full-body motion capture including the native support of ManusVR gloves for finger tracking. All demos started off with a dance show of the famous Japanese song USA by Da Pump which attracted a big crowd every single time. After the dance show we shared news, developments and interesting features of the MVN Animate motion capture system. SEGA Interactive session
On Thursday we hosted a technical session together wit Zero C Seven and SEGA Interactive. During the session we shared the latest developments at Xsens. SEGA Interactive presented their research involving the Xsens MVN Animate system, they validated our motion capture data in their production pipeline. Also SEGA Interactive showed several productions and live shows that were produced with Xsens technology. We want to thank SEGA Interactive for participating in this session and sharing their positive feedback.

Real-Time LIVE
Siggraph Asia signed off with an exciting mix of live sessions during their much anticipated Real-Time LIVE. It was the last part of the conference and during the exhibit it was clear that everyone was excited about this session. We already met up with our friends from IKINEMA and they were confident about their session with GREE, WFLE, StretchSense and of course Xsens. Together they did a flawless demonstration of their Vtuber platform live on stage. Two Vtubers were shown live on the screen while being driven by two actors wearing a facial rig, Xsens full-body motion capture and StretchSense gloves.

Thanks to all these amazing people and companies, the distributor meeting and Siggraph Asia were a big success. We were excited to share all new developments and plans with you during these two events. Xsens has elaborate growth plans and it is exciting to see all the positive feedback we receive. The future is bright and we hope you join our journey.